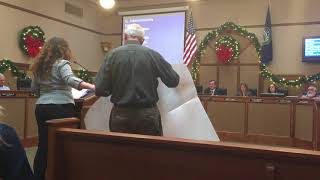 I am grateful to be standing before you during the public commentary, and ask that you allow me to exercise my first amendment right in full.

My name is Autumn Sky Burns and I am a resident of Papillion and city council hopeful who was affected by Ordinance seventeen ninety-eight, the recent ward boundary changes. I have lived and raised my sons in Papillion for almost 12 years and have owned a home in the Tara Heights neighborhood for the last 8. A little over a year ago, I decided to fully invest in running for Papillion City Council in Ward 1.

So when I found out that the Council had changed the Wards withOUT a second or third reading and only notifying the public with the bare minimum, I was justifiably upset. The changes moved me from Ward 1 to Ward 4, meaning I can no longer run in the ward I’ve been laying groundwork in for the past year.

With the changes directly affecting my campaign, this has caused much speculation about the timing & necessity of the ward changes, the manner in which it was done and highlights the lack of clear communication and transparency from the city when making these changes. That is the REAL reason I am here before you.

Thankfully due to the Freedom of Information Act; I was able to secure a timeline the redistricting. Please allow me to share it so you may draw your own conclusions as to how this appears to me and my supporters, and the tax-payers of Papillion:

April 10 – I met with Mayor Black to discuss my intentions to run for Ward 1.

October 18 - Papillion City Administrator Christine Myers identified via email that the city would need MAPA’s assistance on redrawing the Wards once the annexation of Cottonwood & it’s “approximately 700 people”, is approved as it “appeared to be a tipping point” for redistricting.

*To note as of 12/19/17 the city nor MAPA has been able to provide documentation that this addition forced a mandatory redistricting as defined in Nebraska Statute 19-3052.

October 28 - City of Papillion approved the annexation plans for Cottonwood.

October 27 - City Papillion sent suggestions of their ideal remapping & notes it would leave the incumbent in Ward 1.

October 31 - Greg Youell of MAPA emails Myers and agrees to provide services and points out “this is a small population addition” but still anticipates charging the full $1,500 fee.

November 6 - Meyers asks for completion of the remapping prior to March 31, 2018 and expresses desire for completion earlier for the December 5 Council Meeting for consideration and final approval at the January 2nd meeting.

November 9 - Agreement for services signed between Papillion and MAPA to be completed by December 31, 2017.

*Mayor Black has stated in his public response on social media & emails to concerned citizens that a “very independent process with MAPA, not city staff, doing the Ward remapping.” The emails from Nov. 13th shows we were mislead.

November 21 - City Council meeting. I also see Mayor Black that day as my campaign account is at the bank he works at; we stop to chat & he mentions that I should make sure to attend WinterWonderland.

November 22 - Kummer states in an email to MAPA that the Council would approve the redistricting involving Scenario 3 at the December 5 meeting, waiving the second and third reading.

November 30 – Groundbreaking for the Papillion Community Rec center; I attend and speak personally to several of the city council members.  I even ask one council member about attending meetings regularly – I say that as a single mom I struggle to make it to the meetings but I always read the notes afterwards to make sure I know if something big is coming up.  I’m assured that reading the notes afterwards is good enough & to keep knocking doors.  Another council member mentions to a state senator as I’m speaking with him that the “council is the best we have ever had – we don’t want to see any changes.”  I may note this is the same council person that told me multiple times over the last year that it was rude to run for someone’s seat before they are ready to “retire”.

December 1 - The three scenarios for the ward maps are available to the public, if they saw the legal notice in the Papillion Times - and went onto the City of Papillion website and downloaded the entire city council member packet.  It should be noted that although the city has invested in many different forms of communication - including Mayors Letter, City Website, Facebook, Twitter, etc - no notice was provided event though on the agenda it stated that staff was requesting waiving the second and third readings, an acknowledgment this wasn’t typical procedure for voting on an ordinance.

December 5 - The council votes to waive 2nd & 3rd reading through approving the agenda; and the ward boundaries are able to be pushed through in one night with almost zero input from the community.

December 6 - I call city hall & request a meeting to discuss the ordinance and the irregularity of waiving a 2nd & 3rd reading.  I was told it was necessary due to state statute & “everyone forgot you were running, it didn’t’ occur to us that it may affect you until we were in the bar afterwards.”

After hearing these FACTS, I asked you: Why?

Several of you council members have told me that your constituents “Don’t care” who their representative is.

I CARE who my representative is and I care EVEN MORE about HOW my City Council members conduct business and the nature of their actions, as YOU represent US, the taxpayers.

I have dedicated the last year of my life to making sure Papillion and in particular – Ward 1 taxpayers - know I care. I’ve been knocking on doors for a long time, too, and I realize the average person doesn’t know their councilperson. That doesn’t give you reason or justification for violating the city ordinance, the rule of law and the confidence of the people to have a voice in their government.

This - and the current political climate reflects the distrust citizens have toward elected officials from the grass roots up. People don’t trust politicians. The people YOU represent don’t trust you. You may view that as citizens “not caring” about their representation, but in reality, it is the exact opposite.

So I ask you this - How are you actively building our trust? What do you do to give citizens a reason to care about their representation, Council Members?

I am disheartened that you - our council and city administration - fail to grasp the enormity of this situation and your hasty actions. At best, the action of the Council and the City was negligent and at worst, was malicious with the intent to maintain the status quo.

As a tax paying citizen of this town I am dismayed by the actions of this council. Your actions speak louder than words, and they are telling me you do not value public input on something as important as representation and rule of law.

I ask you be respectful and follow the procedures established, welcome citizen input

Finally, I ask that you honor the oath of office you took when you vowed to keep the best interest of Papillion and its people at heart.

Thank you for your time.

*The full remarks were longer than 5 minutes, parts of the letter were omitted during the remarks to stay under time. Video will differ from written remarks.